Since the Gold Rush of 1849, San Francisco has been the real gem of the West. Famous for its hills and Mediterranean climate, the city offers a range of sites and activities for the entire family. There’s the Golden Gate Bridge, Fisherman’s Wharf, Chinatown, Little Italy, Alcatraz and you can see it all in a fun fashion — we’ll get to that later. The best part of all is while you might be tempted to leave your heart in San Francisco, you won’t have to leave your wallet.

Nearly 15 million people visit San Francisco every year, and with a population of over 6 million, it’s easy to see why San Francisco is the fourth largest city in the U.S. The hum and buzz of activity helps to set San Francisco apart as a truly 21st century metropolis. And much of its 21st century appeal is tied to its fabulous history.

For example, you can take a stroll down Grant Street right into the heart of America’s largest Chinatown. The sights, smells and sounds of Chinatown attract more visitors than the Golden Gate Bridge. You can rest assured there are plenty of places to catch cheap eats and even cheaper treats.

For a different slice of San Franciscan life head to Little Italy at the North Shore. The area is a sure hit for authentic Italian cuisine. Choose from one of the many restaurants, bakeries, delis, and coffee shops that line the street. Check out Cioppino’s for traditional Italian seafood. In my book, tastiest pastries on the West Coast are at Stella Pastry and Café.

The Golden Gate Bridge is the city’s most recognizable landmark and a popular tourist destination. The Bridge opened in 1937, took four years to complete and until 1964 was the world’s longest bridge. A bridge for all reasons, you can bike, drive or even walk across and measure it yourself. From the bridge you can see several of the city’s attractions, including Fisherman’s Wharf and Alcatraz.

Fisherman’s Wharf is on the top of the list of places to see San Francisco. It’s a ton of day trips all wrapped into one great location. At Fisherman’s Wharf you can do it all! You can take a bay cruise under the Golden Gate Bridge and see some incredible views of the city. Then there’s pier 39, San Francisco’s #1 attraction where you can see their famous sea lions soaking up the rays.

You can actually take a three hour tour to Alcatraz by boat, just a mile and a quarter off Fisherman’s Wharf. A great way to hear some great stories is to listen to the audiocassette tour while you walk around the island. It’s called “the rock”, told by former inmates and prison guards…real stories from those who lived to tell the tale! You’ll want to get your ticket as early as possible too, because these tickets sell out days ahead.

When getting around San Francisco some say the best advice is to NOT rent a car. The parking is limited and expensive. Besides, why rent a car when you’ve got two best friends in town: BART and MUNI?

BART, (Bay Area Rapid Transit) covers the underground subway system throughout the entire Bay Area. And MUNI, (short for “municipal railway transit) provides buses, street cars and the in-town subway system. It’s the seventh largest public transit system in the U.S. and once you know where you want to go, extremely convenient and easy to use. Just hop on and hop off! 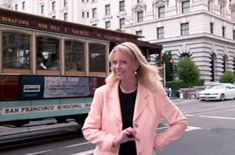 As you can see San Francisco is a city on the move. It invites people from all over the world to join along in a chorus of family fun-filled activity. Treat yourself to a city that offers great food, a great climate and great time.