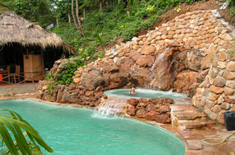 The kingdom of Cambodia is one of the fastest growing vacation destinations in the world. Home to one of the ancient wonders of the world, the lost city of Angkor Wat. Cambodia is located in mainland Southeast Asia surrounded by Vietnam, Laos, and Thailand. It’s a country that never ceases to amaze visitors, with its incredible archeological sites, fascinating history, and an ancient culture that has evolved from the powerful Angkor civilization of the 11th century.

With its turbulent past behind it, Cambodia is rebuilding for the future and bending over backwards to welcome visitors. Tourism is taking off by leaps and bounds, and Cambodia is definitely becoming the next hot spot of this century!

Here….. In the mystical province of Siem Reap, you’ll be close to everything…adventuresome day trips to see temples and ruins, shopping, and the best hotels. The main draw in Siem Reap has to be the ancient temples. “Angkor Thom” was once the capitol of Cambodia and home to one million people, rivaling that of current day Dallas, Texas. The wooden buildings, where the residents worked and lived, have long since decayed, but their temples remain —and they had a lot of temples! There are approximately 100 monuments within 15 square miles. There is a balloon tour ride that will give you a bird’s eye view of just how big this vast expanse of civilization was situated. 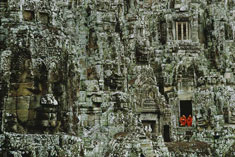 Angkor Thom (or simply “Angkor”) is the largest temple complex in the world with over 72 major monuments, including the most famous one….Angkor Wat! The pyramids have got nothin’ on this place! Angkor Thom means, “city of the temple,” and is believed to be an important ancient city from the Khmer civilization. (Angkor Thom is the city, Angkor Wat is the main temple.) In 1992, the whole city of Angkor was declared a world heritage site.

From the height of the balloon tour, you can see the enormous moat that surrounds Angkor Wat. 570 feet wide and about four miles long, It surrounds what is called the largest temple in the world. The Angkor Wat Temple was constructed in a period of over 30 years. The complex consists of five towers. These towers are believed to represent the five peaks of Mount Meru, the home of gods and center of the Hindu Universe. With the decline of the ancient Khmer empire, Angkor Wat was turned into a Buddhist temple.

Now, are your legs in shape? Been workin’ out on the tread mill? Well, the entrance to Angkor Wat is just over a pedestrian bridge that runs about a quarter of a mile over the moat. Once over the bridge, you’ll walk through the entrance gate and start your exploration. Now, if you’re not in shape and you get too hot, you can walk to the gate, go inside and take a picture of the temples and then go back. But, if you want to walk all the way through, you should know that it’s a mile from the entrance to the other side, where a bus is going to pick you up. 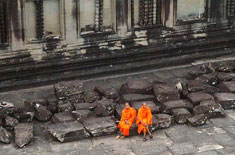 But it’s definitely worth the hike and the Temple of Angkor Wat is the most famous temple here. It was dedicated to the Hindu god Vishnu by the king between 1131 and 1150 AD. You will see some of the most beautiful examples of ancient Khmer and Hindu art on these walls. What’s really great, is the ceilings are still intact in many areas. You’ll notice the intricacy of the carving and the painting, and after all this time, you can still see the colors. The detail is distinct right down to minute details of hands and feet. And it all looks practically new!

In the center is a huge pyramid-like structure. To the ancient Khmers this was not only the center of the temple, it was the center of their world. You can actually climb the stairs to the top, but before you do, I have to tell you it’s a little bit tricky. The stairs are only about six inches wide, so you’re not going to get your whole foot on the stair- you’re going to have to go a little sideways. Going up is not the problem, it’s coming back down!

There is a lot of symbolism here in Angkor. It is very prevalent at another of Angkor Thom’s famous monuments…the Bayon Temple. The Bayon Temple is located in the center of Angkor Thom. It used to serve as the capital of the Khmer empire and consists of 54 towers. The towers kind of play tricks with your eyes. You look at them and you say, “That’s so beautiful.” But the longer you look, you start seeing faces in the spires, and that’s what I think is so neat, because the faces are really there. It’s amazing!

You can actually climb up and have a closer look, but you’ll have to use all fours to get up there. The fifty-four spires of Bayon each have four faces, one on each side. You almost wait for them to open their eyes! Each face is actually smiling, representing the smiles of compassion, kindness, equality and sympathy. A true expression of the people of Cambodia.

One of the best ways to enter the Bayon Temple is an adventure in itself. You can climb on board the back of an elephant and follow your guide on a short trek through the jungle. You’ll come to an avenue with rows of carved figures on either side, lining the entrance to one of the Angkor Thom gates. One side has 54 demons on it. The other has 54 guardian gods. Both rows hold a seven headed snake in their grasp. The statues are acting out the Hindu story of the churning of the ocean, turning water to milk. It’s a common theme here at Angkor. These carvings at Angkor reflect the mixture of both Buddhist and Hindu beliefs in their society. 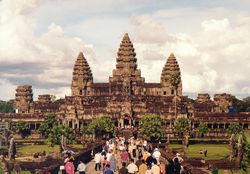 Speaking of elephants, don’t miss the “elephant terrace” that stretches 1000 feet along what looks to be a football field. On one side is a wall of sandstone, and up top, is a terrace. Historical scenes are carved into the wall and tell an amazing story. The king would sit up on the terrace and he would look down on the field to watch the elephants fighting. On the wall you can see carvings of what it must have been like. You see the elephants with their trunks entwined and the Mahouts using spears or sticks to try and knock each other off. The loser elephant would run away, while the winning elephant would stay in the middle victorious, ready to fight the next elephant challenger to enter the ring.

The adventure doesn’t stop there! Many of the temples were built between the 7th and 13th centuries by the Khmer kings. However, most of the temples here were not rediscovered until the late 19th century, and one temple, “Ta Phrom”, was totally overgrown and engulfed by the jungle, itself! Can you imagine coming out of the jungle and finding all this in the late 1800’s? Notice I say it was “found” then. It was built almost a thousand years ago!

The only people who knew of its existence were traveling monks who stumbled across it on their treks through the Cambodian jungle. They would tell legends about this mysterious city which appeared to have been built by gods or giants, but few people believed these tales to be true. So the city lay cloaked in mystery for over 400 years until Henry Mouhot uncovered it in 1860. And they’re going to keep it exactly the way it was discovered- they’re not going to renovate it. If you think it looks like a movie set, actually…it was! Angelina Jolie’s Laura Croft’s Tomb Raider was filmed here!

Then there’s the spot where the most famous picture of Ta Phrom was taken. It’s where the tree grows over the temple and into the stone. Now that’s the picture you want to take. Ta Phrom is, by far, my favorite temple. Because it’s one of the only temples that hasn’t been restored, there’s a feeling of enchantment when you’re there. The banyan trees seem to have a life of their own. Banyans are a type of fig tree and they are quite a sight to see. When banyan trees grow, their roots grow downward from its branches, creating multiple trunks that cover anything in it’s way. After hundreds of years of growing over the temple, no wonder Ta Phrom lay undiscovered for so long!

What an amazing adventure! It can take a few days to see all of the temples, but I’ve got to tell you that it’s worth every minute of your time. Wouldn’t it be nice to take a relic of the temples home with you? You can’t take any actual ruins with you, but I know a place where you can buy excellent hand made replicas.

“Artisans d’Angkor” is a company that provides opportunities to young artisans in rural villages all around Siem Reap a chance to practice their craft or learn the skill of sculpturing. Perhaps, their appreciation for Khmer culture is what also influences these grand works of art. It takes many hours of hard work, up to 6000 hours actually, to make one of the relic-like pieces. To think that they start with just a block of wood or sand stone, is just amazing. No matter how they cut or carve it, these young artisans have incredible talent. After you’ve seen this workshop, you won’t be able to resist buying something from their magnificent gallery. They’ve got high quality handcrafted sculptures that you won’t be able to find anywhere else.

After a day at Angkor, I only scratched the surface of this great monument. I found that I had to make several trips back here over a couple of days to truly appreciate what it has to offer. The antiquity, the call of the jungle, perfectly preserved artwork, all of it makes for an experience of a life time!