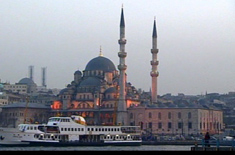 How can you see Asia and Europe at exactly the same time? By cruising the Bosporus Strait alongside of Turkey! In what country was the old city of Constantinople located in? You’ve got 5 seconds and I’ll give you extra points if you can tell me what the city’s called today! The answer? Constantinople – if you guessed the country of Bulgaria, well, you’d be wrong. It’s Turkey! And today, Constantinople’s called Istanbul – the largest city in the country. It is fascinating here, this was the center of the “Old World” – the Roman Empire, the Byzantines, the Ottoman Empire – all were here! Sultans and emperors, harem girls – the blue mosque – it’s fascinating!

Turkey is a country filled with historic treasures… an extraordinary and exotic vacation destination with a blend of cultures that goes back thousands of years. But exactly where is Turkey? Europe or Asia? Technically, it’s both. The only country in the world that sits on two continents, it is literally an ancient land bridge. But Turkey is also known as the cradle of ancient civilization, home to people and stories from, and before, biblical times. From Alexander the Great to the Ottoman Empire, Turkey has a long and tumultuous history. And, here, the ancient kingdoms really come alive.

Turkey is filled with amazing sites. Just imagine ballooning over the ancient monoliths of Cappadocia, or walking in the footsteps of Cleopatra and the Apostle Paul in the 2,000 year old Roman city of Ephesus. There is definitely a lot to experience here, including its magnificent mosques… the beauty of its carpets…the sizzling kabobs… and the Turkish showmanship. All that makes this country an exciting vacation destination!

The largest city in Turkey is Istanbul, once known as Constantinople, and today, it’s a hotspot for tourism and culture. Istanbul has a very strategic location, surrounded on three sides by water: the sea of Marmara, the Golden Horn, and the Bosporus Strait, the divider between Europe and Asia. So I figure a boat cruise is the perfect way to get acquainted! I discovered, that until recently, folks here in Istanbul liked getting around the old fashioned way! Before 1973, there were just boats going back and forth between the two continents. The first bridge between the continents was built in 1973, followed by a second in the 80’s. This was once regarded as the center of the old world. The capital of empire after empire: Roman, Byzantine and Ottoman. Rulers fought for control of this historic city because its location was ideal. Not only was it surrounded by water, making it easier to defend, but Istanbul was right on the east-west trade routes. 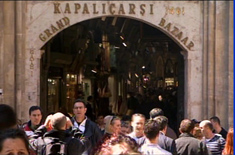 You know, the experience you have in a country always depends on the people that you meet, so, and there are tour guides here that speak English! What will you see? Well, there is St. Sophia, which is behind a blue mosque, and you can’t miss the Topkapi Palace—spectacular! Wait, did I just say “palace?” Like where the sultans lived? Wow, we have to go there for sure! .

The Topkapi Palace is the oldest and largest remaining palace in the world. This was home to a long line of Ottoman sultans, beginning with young Sultan Mehmed II. After conquering Istanbul in 1453, he made his headquarters here in 1479. Right about the time Columbus discovered the Americas. You enter through the Gate of Respect. Only the sultan was allowed to ride on horseback – everybody else had to walk. So, be prepared to hoof it. The layout of Topkapi is typical of Turkish palaces: a series of open courtyards connected by large decorative doors, all surrounded by trees and flowers with an amazing location overlooking the water. Not a bad place to lay your turban!

The most secretive area was the Imperial Hall, particularly the harem complex, where the infamous concubines and eunuchs were housed. Yep- the stories we’ve all heard and seen in the movies are based on fact! Fascinating isn’t it? Your imagination really works overtime here! Then there is my favorite building, that has the sultan’s clothes and costumes, plus it houses the treasury, so the sultan could make a purchase right on the spot. Diamonds and rubies and pearls, oh my! Ooooh – the sultan’s caftans, many embellished with real gold! Caftans (and sultans) were huge, as the sultan always wanted to appear larger than life. Here, you’ll also find the Topkapi Dagger. Remember the movie, with its huge emeralds and jewels? And my favorite, the Spoonseller’s Diamond. worn right in the center of the sultan’s turban. It was sold for pennies, by an unsuspecting peasant who thought it was glass. For a jewel-lover like me, this is heaven on earth. The Topkapi Palace is definitely on the “you gotta see it” list!

The other “gotta see it?” The Sultan Ahmed Mosque, better known to the world as the Blue Mosque…the symbol of Istanbul. With its gorgeous dome and impressive minarets, this is one of the most revered architectural masterpieces in the Islamic world. It’s also extremely popular with visitors, so be prepared to wait in line. Built in the early 1600’s by Sultan Ahmed I, the Blue Mosque is straight out of a fairytale. Surrounded by six minarets, beds of colorful tulips, and a beautiful fountain, it is lovely to behold. Inside, an inner courtyard is where you’ll remove your shoes for entrance into the mosque. 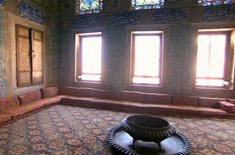 Under the dome inside, a rope separates visitors and worshipers. Carpeted floors and intricately tiled gallery walls are softly lit, by candles in olden times, however, with bulbs today. Now, you don’t have to wear a scarf inside the Blue Mosque because this is a museum, it’s not just a mosque and they say the government just can’t keep up with it. However, removing your shoes before entering any mosque is usually mandatory, you might want to carry a plastic bag with you so you don’t have to search for them when you leave. What’s interesting here is, it wasn’t originally called the Blue Mosque, it was the Mosque of Sultan Ahmed. People started calling it the “Blue Mosque” because of all the blue tiles. A little trivia here is that you can’t draw the figures of Allah or Mohammed so they’re represented here with the tulip and the carnation. Allah is the tulip, and Mohammed is the carnation. And you’ll see it all over the walls. In 2009, the blue mosque was on President Barak Obama’s “gotta see it” list, as well as the Pope’s, marking the second Papal visit in history to a Muslim place of worship! Now that’s an endorsement!

Istanbul is becoming a hotspot for travelers, as more and more people are discovering how special it is! From its amazing historical sites, to the markets and bazaars, Turkish culture is a big draw for visitors. One cultural experience that’s been rejuvenating body and soul since ancient times is the Turkish bath, or hamman. The hamman was the original therapeutic spa, very popular in the 16th century, it still exists today, but in smaller numbers.

The hammans were so intimately tied to the everyday routine of working and praying, that the bath houses quickly became important social centers. Today, men and women visit separately, either in different areas or at different times of the day. Hammans traditionally contain at least 3 rooms, the hot room, warm room, and cool room. Clothing is optional; you can wear swimwear, underwear, borrow a “pestamals,” a checkered sarong, or wear nothing at all. Bathers start in the sweating area, reclining on the big heated marble stone –aptly named “the naval stone.”

Wow, super suds! You are administered a mass of scrubbing bubbles—I need one of those soaping webs at home! Once you’re thoroughly soaped up, a ‘kese,’ or rough cloth mitt, is used to exfoliate and clean the skin. You’ll be amazed at how much comes off! “Gentle” is not a word I’d use to describe the scrubbing…maybe…invigorating? Yep, that’s a tactful way of putting it. Then, the rinse, ahhh…perfect! Traditional hammans can be found all over the country ranging from basic to luxurious. And many are associated with the spas at major hotels. One of the best hammans can be found at the Laveda Spa in the Ritz-Carlton Hotel, Istanbul, located right in the heart of the Domabahce Quarter.

A visit to Turkey is an eye opening experience. It’s definitely not what I expected to find…centuries of history and stories that I didn’t realize originated here. Istanbul has amazing shopping, great food….luxurious hotels…..and locals who are genuine and open. So on the Laura McKenzie Scale of one to ten, I’d give Istanbul a 9 for hotels 8 for food 8 for shopping 7 getting around 9 sights and activities 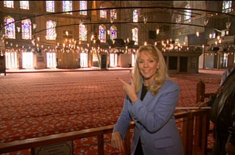 Would I come back? Absolutely, I have to see Troy and that big wooden horse! Here’s some trivia. Did you know that tulips were originally from Turkey? It’s true – the Turks sent them to Holland in the 16th century. Win a bet with that one why don’t you? This is such a fascinating country, I think we should come back for more! Don’t miss our Turkey tour!