Prague was a city that I’d looked forward to visiting for a long time, and when I finally had the chance to go, I found it one of the most charming cities in Eastern Europe. Located in the heart of Bohemia, and the capitol of the Czech Republic, Prague has been called many things over the years: “The Golden City, “The City of a Hundred Spires” and “The Paris of the Thirties.” It was most recently dubbed “Hollywood East” because of all the movies that have been shot here, as producers discovered it’s lovely mixture of beauty, atmosphere and history. 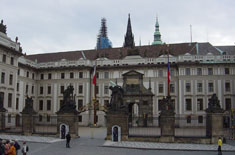 I think I was most impressed with the advances in culture, food and commerce that’s exploded in Prague since the fall of communism after the “Velvet Revolution” in 1989. In less than 20 years, Prague has caught up with the rest of Europe, claiming it’s spot as a world class destination.

Since Prague is known as one of the world’s best-preserved cities, a great way to soak up the atmosphere is to just walk. Grab a map and wander around it’s intricately designed cobble-stoned streets As you make your way through town you’ll notice the mismatched collection of Romanesque, Gothic, Art Nouveau and Baroque buildings lining the city streets. It’s like walking through a living museum and film buffs will recognize some of the many movie locations including “Mission Impossible” and “Amadeus”.

Two of the most famous landmarks in the center of town are the Prague Castle and the Charles Bridge. For a thousand years Prague Castle has stood watch over the city, visually and literally. It dominates Prague’s skyline and from its perch above the Vltava River has the best-known view of the city.

The Charles Bridge, named after the 14th century royal Charles IV, has served as pedestrian thoroughfare for over 600 years. While the guide books suggest visiting early in the morning when it’s empty and easy to get scenic photos, I like to visit in the middle of the day. This is when it’s busy and a lot of people are out having fun and buying souvenirs from the many vendors who set up on the bridge. 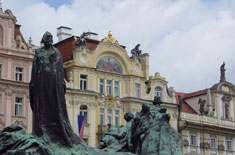 One part of town that’s covered on all the tours is the Jewish Quarter. In the 18th century, walls were built around the Quarter restricting Jews from living outside the area. The ban was lifted in 1848 and the walls came down shortly after. The Ceremonial Hall and Jewish Museum preserve the memory of the period amidst the rapid changes going on around it. And nothing in Prague is changing faster than the economy.

It might surprise some to learn that Prague has embraced capitalism by providing visitors plenty of opportunities to shop! The Flea Market offers one-stop shopping for local art, trinkets and gifts to take home to family and friends. But while hand-made marionettes are the famous souvenirs, the real buy in Prague is crystal. The preferred glass of the world’s elite, fine Bohemian crystal has been produced here since the 14th Century. There are lots of little crystal shops featuring beautifully designed and intricately cut jewelry, vases and chandeliers for much less than you’d pay back home. The quality is high and the prices are low, and most shops will ship your purchases home for you. They’ll recommend the proper insurance and immediately deduct your value added tax. For purchases over a certain amount that you carry home, be sure to get a value added tax form (called “VAT” or “De-Tax”) to get your VAT refunded when you leave the European Union.

While walking is a great way to get around town, if you’re running short on time take advantage of the trams. They’re inexpensive, punctual and great way to see the city. You might just might catch some live entertainment on the tram and decide not to get off! In addition to the sights of Prague, there are a couple of day trips that I’d definitely recommend. 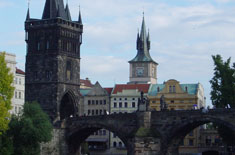 The gothic Loket Castle is a short scenic drive away and well worth the 90-minute tour. It’s said to be the most beautiful and best preserved castle in the Czech Republic. Loket is the Czech word for “elbow,” and the town and castle were named Loket because the Royal Fortress was built on a cliff overlooking a bend in the Ohre River below. In the Middle Ages the fortified city of Loket was known as the key to the Kingdom of Bohemia. Today, the town of Loket throws open its gates, welcoming tourists to experience a taste of yesteryear. Castle tours are designed around the history of the castle and special displays include a large collection of Bohemian China, a museum devoted to German poet Goethe and my personal favorite, a dungeon tour!

Located just six miles from Loket is renowned spa town Karlovy Vary (or Karlsbaad, as it’s sometimes called). The town has been mostly restored since the fall of Communism and it’s absolutely gorgeous. With 12 thermal springs, all with a very high mineral content, the town has attracted royalty, world leaders, great writers, and locals for hundreds of years. It recently attracted a film crew to shoot the town and it’s main hotel for the Queen Latifah movie, “Last Holiday”. But what I really like most about the city is it’s pedestrian only zones-foot traffic or horse and carriages only, just like the old days!

Prague is an incredible city with a delicate mixture of the well preserved past and dynamic future. If you’re looking for a European vacation with an old world feel, but with but with all the five star hotels and conveniences, then Prague is a great choice. The prices have increased with it’s development however, and the Eastern European bargains are now found in lesser developed countries like Romania and Slovakia. 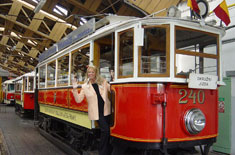 Tips: -The tourist season generally runs from April through October.
-Bring along comfortable walking shoes as the city is best experienced by foot.
-Although the Czech Republic is in the EU, the Czech Crown (Koruna) is the best way to do cash transactions as the Euro is not widely accepted yet.